74. Why Duryodhana Felt Insulted at the End of the Rajasuya Sacrifice

20 / Why Duryodhana Felt Insulted at the End of the Rājasūya Sacrifice
King Yudhiṣṭhira was known as ajātaśatru, or a person who has no enemy. Therefore, when all men, all demigods, all kings, sages and saints saw the successful termination of the Rājasūya yaj�a performed by King Yudhiṣṭhira, they became very happy. That Duryodhana alone was not happy was astonishing to Mahārāja Parīkṣit, and therefore he requested Śukadeva Gosvāmī to explain this.
Śukadeva Gosvāmī said, "My dear King Parīkṣit, your grandfather, King Yudhiṣṭhira, was a great soul. His congenial disposition attracted everyone as his friend, and therefore he was known as ajātaśatru, one who never created an enemy. He engaged all the members of the Kuru dynasty in taking charge of different departments for the management of the Rājasūya sacrifice. For example, Bhīmasena was put in charge of the kitchen department, Duryodhana in charge of the treasury department, Sahadeva in charge of the reception department, Nakula in charge of the store department, and Arjuna was engaged in looking after the comforts of the elderly persons. The most astonishing feature was that Kṛṣṇa, the Supreme Personality of Godhead, took charge of washing the feet of all the incoming guests. The Queen, the goddess of fortune Draupadī, was in charge of administering the distribution of food, and because Karṇa was famous for giving charity, he was put in charge of the charity department. In this way Sātyaki, Vikarṇa, Hārdikya, Vidura, Bhūriśravā, and Santardana, the son of Bāhlīka, were all engaged in different departments for managing the affairs of the Rājasūya sacrifice. They were all so bound in loving affection for King Yudhiṣṭhira that they simply wanted to please him.
After Śiśupāla had died by the mercy of Lord Kṛṣṇa and had become merged in the spiritual existence, and after the end of the Rājasūya yaj�a, when all friends, guests and well-wishers had been sufficiently honored and rewarded, King Yudhiṣṭhira went to bathe in the Ganges. The city of Hastināpura is today standing on the bank of the Yamunā, and the statement of Śrīmad-Bhāgavatam that King Yudhiṣṭhira went to bathe in the Ganges indicates, therefore, that during the time of the Pāṇḍavas, the river Yamunā was also known as the Ganges. While the King was taking the avabhṛtha bath, different musical instruments, such as mṛdaṅgas, conchshells, drums, kettledrums and bugles, vibrated. In addition, the ankle bells of the dancing girls jingled. Many groups of professional singers played vīṇās, flutes, gongs and cymbals, and thus a tumultuous sound vibrated in the sky. The princely guests from many kingdoms, like Sṛ�jaya, Kāmboja, Kuru, Kekaya and Kośala, were present with their different flags and gorgeously decorated elephants, chariots, horses and soldiers. All were passing in a procession, and King Yudhiṣṭhira was in the forefront. The executive members such as the priests, religious ministers and brāhmaṇas, were performing a sacrifice and all were loudly chanting the Vedic hymns. The demigods, the inhabitants of the Pitṛloka and Gandharvaloka, as well as many sages, showered flowers from the sky. The men and women of Hastināpura, Indraprastha, their bodies smeared with scents and floral oils, were nicely dressed in colorful garments and decorated with garlands, jewels and ornaments. They were all enjoying the ceremony, and they threw on each other liquid substances like water, oil, milk, butter and yogurt. Some even smeared these on each other's bodies. In this way, they were enjoying the occasion. The professional prostitutes were also engaged by jubilantly smearing these liquid substances on the bodies of the men, and the men reciprocated in the same way. All the liquid substances had been mixed with turmeric and saffron, and their color was a lustrous yellow. 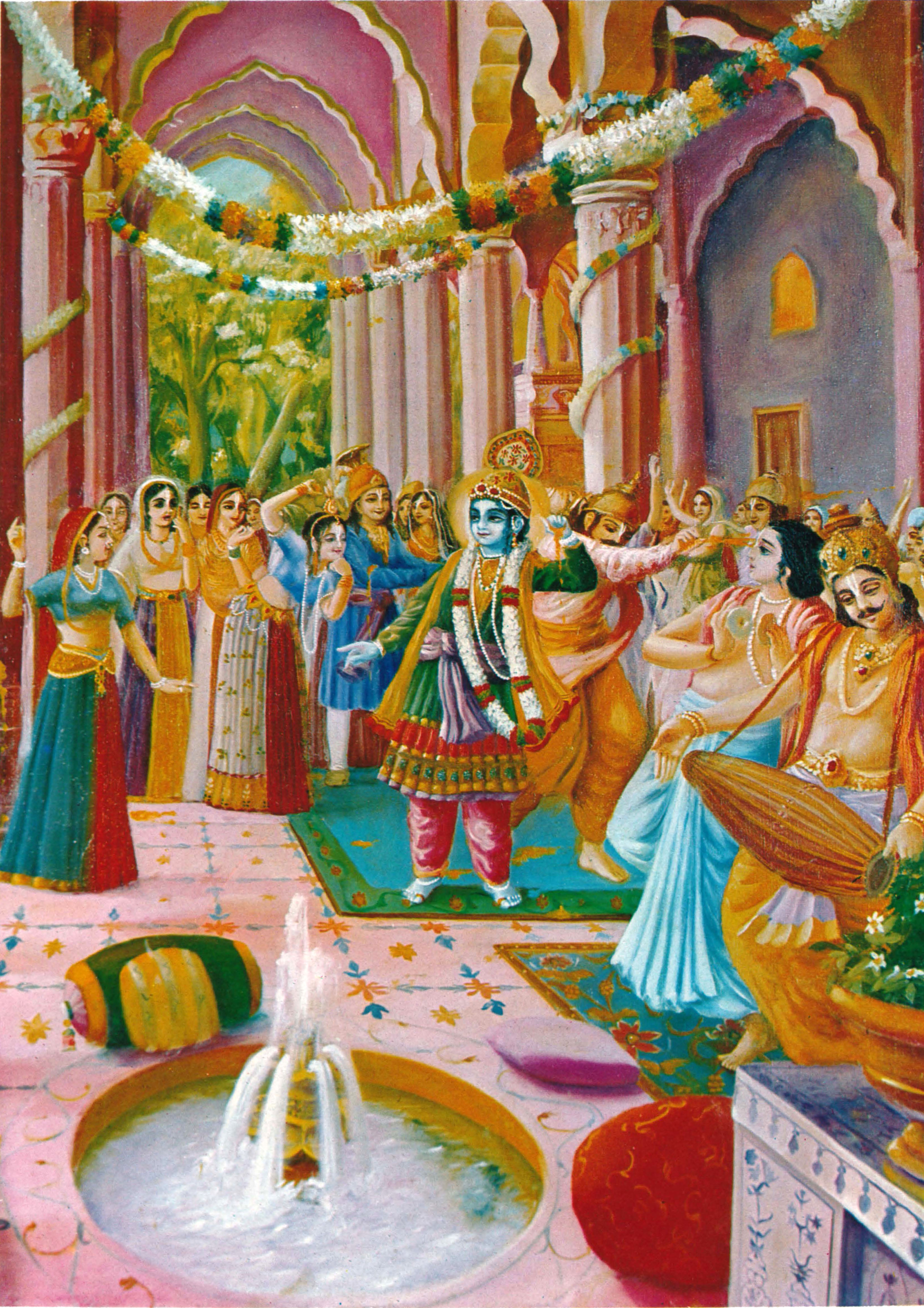 They were all enjoying the occasion by throwing liquid substances on each other.