8 / Lord Kṛṣṇa Fights with Bāṇāsura
When the four months of the rainy season passed and still Aniruddha had not returned home, all the members of the Yadu family became much perturbed. They could not understand how the boy was missing. Fortunately, one day the great sage Nārada came and informed the family about Aniruddha's disappearance from the palace. He explained how Aniruddha had been carried to the city of Śonitapura, the capital of Bāṇāsura's empire, and how Bāṇāsura had arrested him with the nāgapāśa, even though Aniruddha had defeated his soldiers. This news was given in detail, and the whole story was disclosed. Then the members of the Yadu dynasty, all of whom had great affection for Kṛṣṇa, prepared to attack the city of Śonitapura. Practically all the leaders of the family, including Pradyumna, Sātyaki, Gada, Sāmba, Sāraṇa, Nanda, Upananda and Bhadra, combined together and gathered eighteen akṣauhiṇī military divisions into phalanxes. Then they all went to Śonitapura and surrounded it with soldiers, elephants, horses and chariots.
Bāṇāsura heard that the soldiers of the Yadu dynasty were attacking the whole city, tearing down various walls, gates and nearby gardens. Becoming very angry, he immediately ordered his soldiers, who were of equal caliber, to go and face them. Lord Śiva was so kind to Bāṇāsura that he personally came as the commander-in-chief of the military force, assisted by his heroic sons Kārttikeya and Gaṇapati. Seated on his favorite bull, Nandīśvara, Lord Śiva led the fighting against Lord Kṛṣṇa and Balarāma. We can simply imagine how fierce the fighting was--Lord Śiva with his valiant sons on one side and Lord Kṛṣṇa, the Supreme Personality of Godhead, and His elder brother, Śrī Balarāmajī, on the other. The fighting was so fierce that those who saw the battle were struck with wonder, and the hairs on their bodies stood up. Lord Śiva was engaged in fighting directly with Lord Kṛṣṇa, Pradyumna was engaged with Kārttikeya, and Lord Balarāma was engaged with Bāṇāsura's commander-in-chief, Kumbhāṇḍa, who was assisted by Kūpakarṇa. Sāmba, the son of Kṛṣṇa, was engaged in fighting with the son of Bāṇāsura, and Bāṇāsura was engaged in fighting with Sātyaki, commander-in-chief of the Yadu dynasty. In this way the fighting was waged.
News of the fighting spread all over the universe. Demigods such as Lord Brahmā, from higher planetary systems, along with great sages and saintly persons, Siddhas, Cāraṇas and Gandharvas--all being very curious to see the fight between Lord Śiva, Lord Kṛṣṇa and their assistants--were hovering over the battlefield in their airplanes. Lord Śiva is called the bhūta-nātha, being assisted by various types of powerful ghosts and denizens of the inferno-- bhūtas, pretas, pramathas, guhyakas, ḍākinīs, piśācas, kuṣmāṇḍas, vetālas, vīṇāyakas and brahma-rākṣasas. (Of all kinds of ghosts, the brahma-rākṣasas are very powerful. Brāhmaṇas transferred to the role of ghosts become brahma-Rākṣasas.)
The Supreme Personality of Godhead Śrī Kṛṣṇa simply drove all these ghosts away from the battlefield, beating them with His celebrated bow, Śārṅgadhanu. Lord Śiva then began to release all his selected weapons upon the Personality of Godhead. Lord Śrī Kṛṣṇa, without any difficulty, counteracted all these weapons with counter-weapons. He counteracted the brahmāstra, similar to the atomic bomb, by another brahmāstra, and an air weapon by a mountain weapon. When Lord Śiva released a particular weapon bringing about a violent hurricane on the battlefield, Lord Kṛṣṇa presented just the opposing element, a mountain weapon which checked the hurricane on the spot. Similarly when Lord Śiva released his weapon of devastating fire, Kṛṣṇa counteracted it with torrents of rain.
At last, when Lord Śiva released his personal weapon, called pāśupata-śastra, Kṛṣṇa immediately counteracted it by the nārāyaṇa-śastra. Lord Śiva then became exasperated in fighting with Lord Kṛṣṇa. Kṛṣṇa then took the opportunity to release His yawning weapon. When this weapon is released, the opposing party becomes tired, stops fighting, and begins to yawn. Consequently, Lord Śiva became so fatigued that he refused to fight anymore and began to yawn. Kṛṣṇa was now able to turn His attention from the attack of Lord Śiva to the efforts of Bāṇāsura, and He began to kill his personal soldiers with swords and clubs. Meanwhile, Lord Kṛṣṇa's son Pradyumna was fighting fiercely with Kārttikeya, the commander-in-chief of the demigods. Kārttikeya was wounded, and his body was bleeding profusely. In this condition, he left the battlefield and, without fighting anymore, rode away on the back of his peacock carrier. Similarly, Lord Balarāma was smashing Bāṇāsura's commander-in-chief, Kumbhāṇḍa, with the strokes of His club. Kūpakarṇa was also wounded in this way, and both he and Kumbhāṇḍa fell on the battlefield, the commander-in-chief being fatally wounded. Without guidance, all of Bāṇāsura's soldiers scattered here and there. 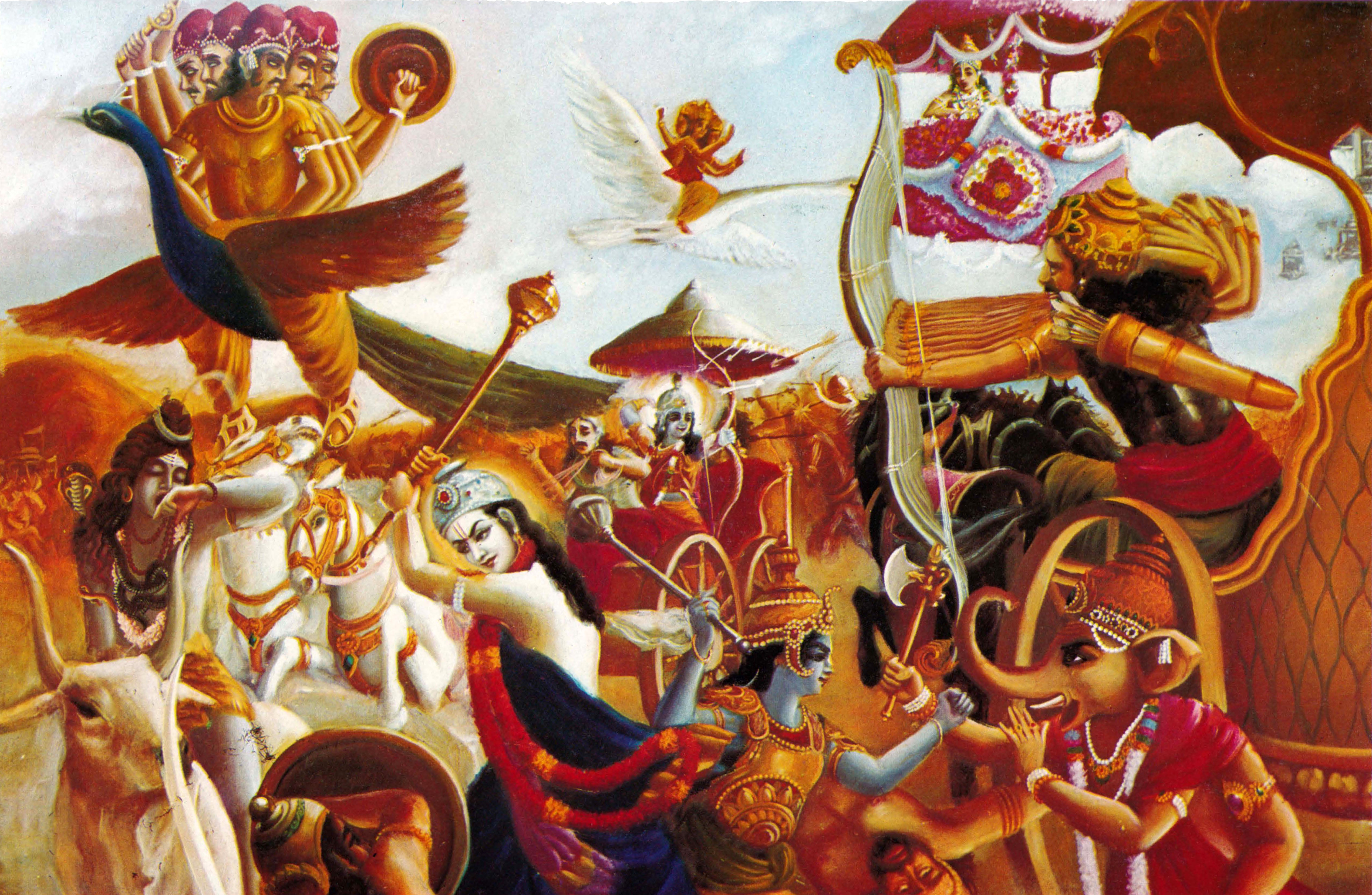